9-23-14 Today’s Tarot is Key 0 Beginning. How long since you did something totally new and different? Time to shake things up a bit. You can’t grow if you never change. This card is about beginnings and faith. 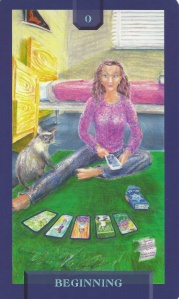 9-22-14 Today’s Tarot is Key 16 Intervention. It may be difficult to get anything done today because of constant interruptions. Just go with it. Do not become frustrated. It will be easier tomorrow. This card is about disruption and enlightenment. 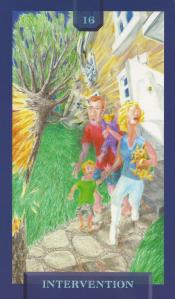 9-21-14 Today’s Tarot is Key 9 Guidance. Consult with authorities and learn all you can before proceeding with your plan. You have a good idea but not enough experience. This card is about counsel and knowledge. 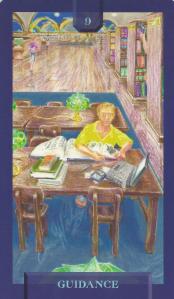 9-20-14 Today’s Tarot is the Youth of Water. There doesn’t always have to be a reason for everything you do. Sometimes it is okay to do something just because it feels good at the moment. Today is one of those times! This card is about fun and excitement.

9-19-14 Today’s Tarot is the Four of Fire. Plan a party to celebrate just being happy with friends and family. Make it an appreciation of life and you will draw more abundance to you! This card is about abundance and prosperity.

9-18-14 Today’s Tarot is Key 1 Manifestation. You already have what you need to create success. Just make every thought, word or deed positively advance your desires. This card is about manifestation and action.

The traditional meaning for The Fool is a new beginning. The Rider/Waite/Smith deck depicts a young person standing on a cliff. The symbology of his clothes and surroundings suggest he is about to embark on a spiritual journey. The Fool is sometimes referred to as a new soul, just learning about life on the physical plane. He is inexperienced but prepared for the leap of faith he is about to make. One of the first things that new readers ask about this card is the title, The Fool. In today’s language a fool is someone who has made bad choices or is just not very smart. We rarely think of him as innocent or inexperienced – quite the contrary. He is someone who knows better and still makes decisions that can be quite destructive. The Fool position in the Tarot cards is not describing such a person. So when Expanding Dimensions thought about a representation for this card, we asked ourselves who in today’s world exemplifies the qualities of The Fool. Key 0 Beginning shows a young college student who has just opened her first deck of Tarot cards. She is embarking on several different journeys. She has just left home for the first time and is on her own, making her own decisions. She is studying for a career and she has chosen to learn the Tarot to develop her spiritual awareness. While she is certainly inexperienced in all these things, she is not foolish. Her companion animal urges her forward, just as the white dog does in the R/W/S deck. The dog is sometimes associated with our lower animal nature which often encourages wrong choices but the cat in Today’s Journey Tarot is wise and suggests that she will be helped along the way.

9-17-14 Today’s Tarot is Key 13 Transition. Changes may begin today. It is okay. You are just moving to the next level, where things will be even better. Go with the flow. This card is about change and transformation. 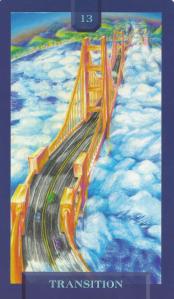 9-16-14 Today’s Tarot is the Two of Fire. You have accomplished a lot but do not lose momentum now. There is still much to be done. This card is about success and reward.

9-15-14 Today’s Tarot is the Seven of Water. The only thing stopping you from having what you want is your own doubts. Go for it. If you believe, it is already yours! This card is about confidence and fulfillment.